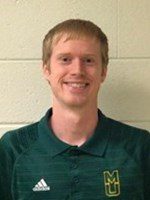 Corey Mehl is the second head coach of the MU Lions Cross Country and Track & Field programs. Having spent the previous two seasons as an assistant in the distance events under Dave Lee, Coach Mehl takes over as head coach going into the 2017-18 season. “This is my first head coaching job for cross country/track & field,” he says. “It’s been a dream of mine for the past several years after being a distance runner throughout most of my life.”

Mehl competed at the collegiate level at the University of Charleston (WV – NCAA DII) from 2005-2009. He was a four-year member of the cross country and track & field teams. There, he was the 2007-08 Male Sportsperson of the Year, three-year captain and four-year varsity letter winner. After graduating with a BS in Business/Athletic Administration in 2009 from UC, Mehl earned his MS in Sport Administration from the University of Louisville in 2011.

Since moving to Portland in 2015, Coach Mehl, originally from Ohio, started his professional career with nearly five years in the road racing industry timing 5Ks, half marathons, and triathlons throughout Northeast Ohio and the Pacific Northwest.

“There are many things that bring me joy in my job as a coach, but none more than seeing my athletes reach a time or a mark on the course or track when they didn’t think it was possible,” says Mehl. “The look on his or her face in that moment crossing the finish line makes everything we sacrifice in sports totally worth it. I am in the business of creating self-confidence! Our athletes have a great work ethic too. Meeting their training goals and developing amazing perseverance will pay dividends during their college career as well as in their adult life after college.”

Mehl loves to quote a line from the Oscar winning film “Chariots of Fire,” where the main character Eric Liddell shares why he runs, even though people close to him wonder why he isn’t pursuing his missionary work: I believe God made me for a purpose, but He also made me fast. And when I run I feel His pleasure.

“That pretty much sums up my program,” concludes Mehl.

To cheer on our cross country/track & field athletes, visit www.gomulions.com to see the full schedule for the 2017-18 season.