Jason Stuckey likes to get his hands dirty. MU’s assistant professor of environmental science is an expert in soils, having earned his Ph.D. in Biogeochemistry at Stanford and his M.S. in Soil Science from Penn State. “I’ve always been interested in the world and how it works,” he says. “I see beauty and design in soils.” 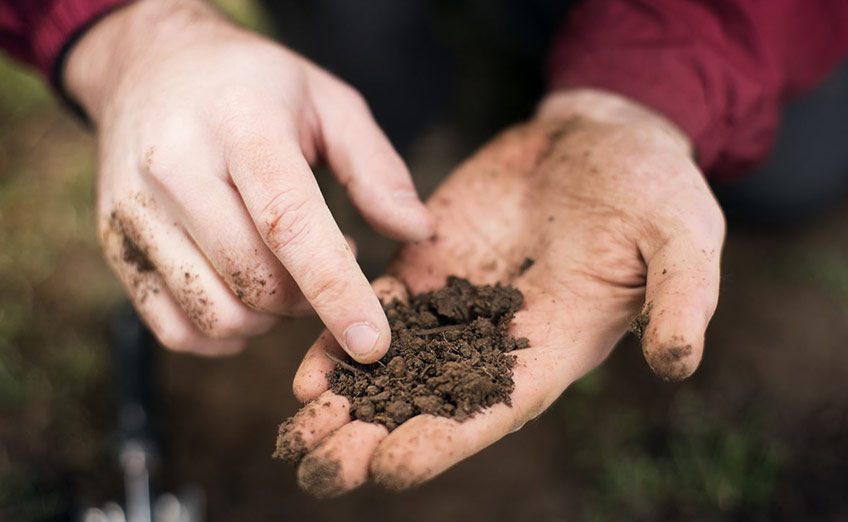 In a move Stuckey describes as God-driven, he enrolled in soil science as an undergrad when his original plan to major in earth science didn’t pan out. “I took my first soils class, and I loved it,” he recalls. “I found soils a fascinating system that I could apply other disciplines to — physics, biology, math, chemistry. Plus, a lot of the program involved being outdoors, and I wanted to be outside!” 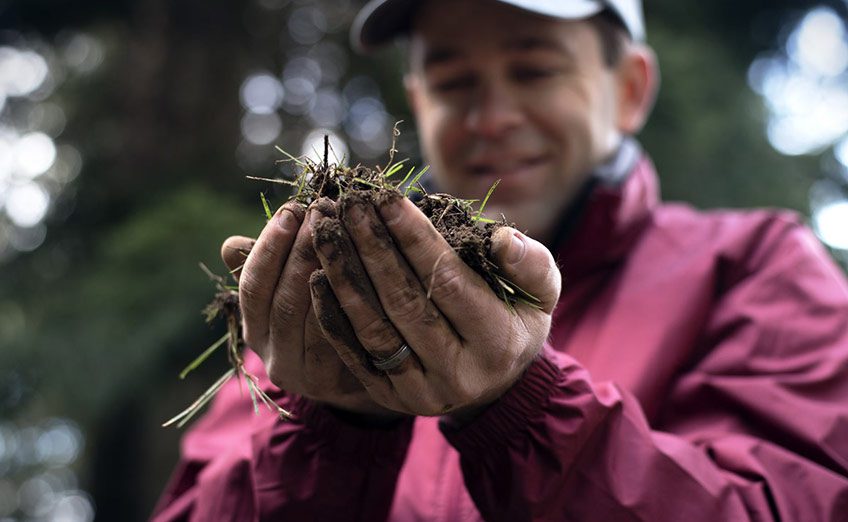 When Stuckey graduated from college, he knew he didn’t want to stop learning. “I had a curiosity and thirst for knowledge that wasn’t quenched by undergrad,” he says. “I wanted to ask new questions and figure out how to answer them. I wanted to be on the frontier of knowledge, on some shore of it.” 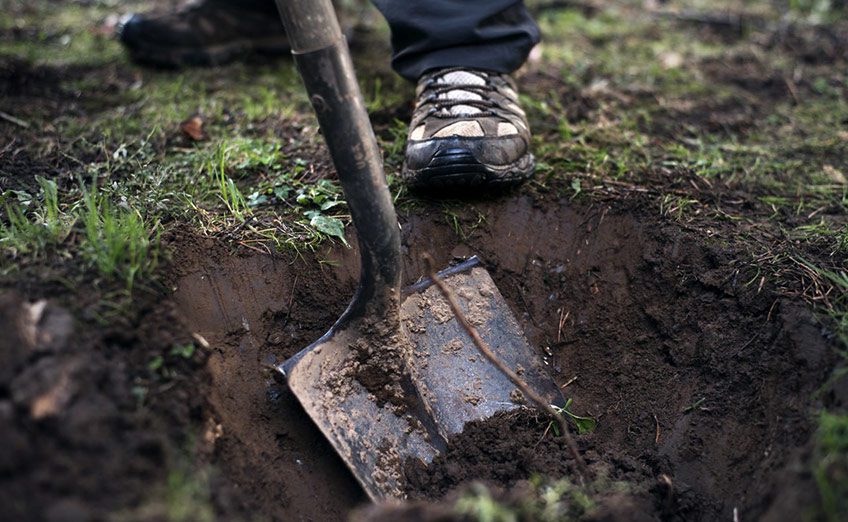 He also felt a pull toward teaching. “I love being a student, listening to lectures, and learning in the university setting,” Stuckey says. “Teachers have been so formative in my life, and I pictured myself being like them, the best ones — the ones that were formative for me.”

In 2005, Stuckey began instructing while he was a grad student at Penn State. He spent eight months doing fieldwork in Chile while teaching a soil chemistry class, developing a lab manual, and running a soil chemistry lab in Spanish. The fieldwork was challenging: Stuckey and his team were tasked with remediating soil that had been contaminated with copper. “We were trying to figure out ways to restore the ecosystem,” he says. “Things were having trouble growing.” 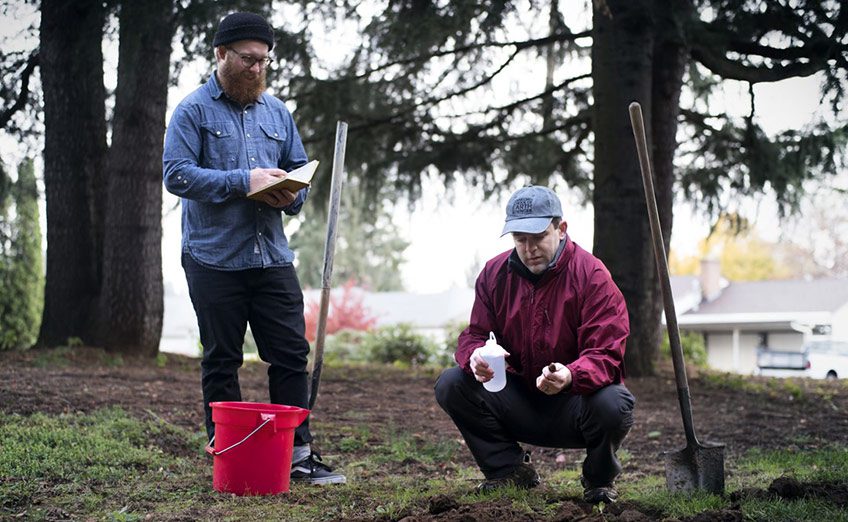 Working in a lab alongside faculty, Stuckey helped scale up the synthesis of a clay that had a special affinity for copper. The clay, which possessed a negative charge, physically and chemically trapped the positively-charged copper particles within the soil, minimizing the accessibility of the copper to the food chain. “It was very rewarding,” he says. 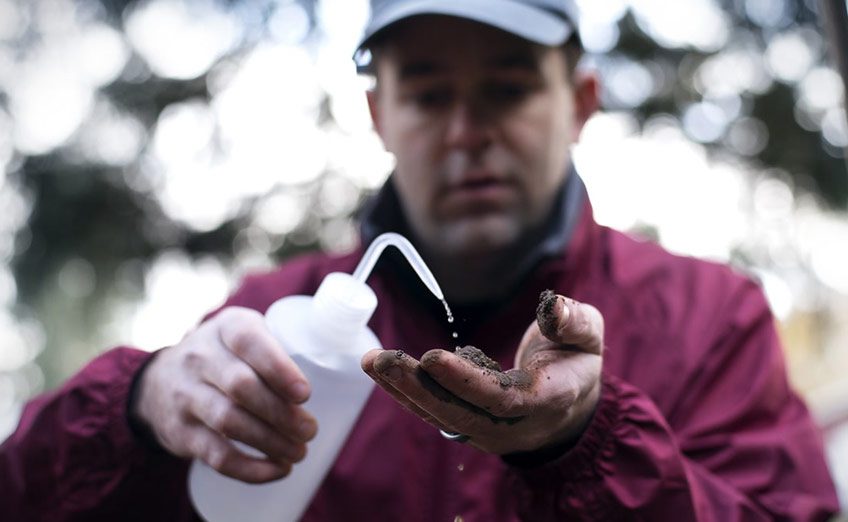 Stuckey went on to earn his Ph.D. at Stanford, where his doctoral research focused on arsenic contamination of groundwater in the Mekong Delta. After graduating in 2014, he spent close to three years as a postdoctoral scholar in the Delaware Environmental Institute at the University of Delaware, where his main responsibilities included conducting research, mentoring Ph.D. students and assisting in the teaching and course development of an environmental soil chemistry class. He also co-taught the soil development and geochemistry module for a Stanford field course in Hawaii with his Ph.D. advisor.

But eventually, Stuckey felt the pull to work somewhere else. 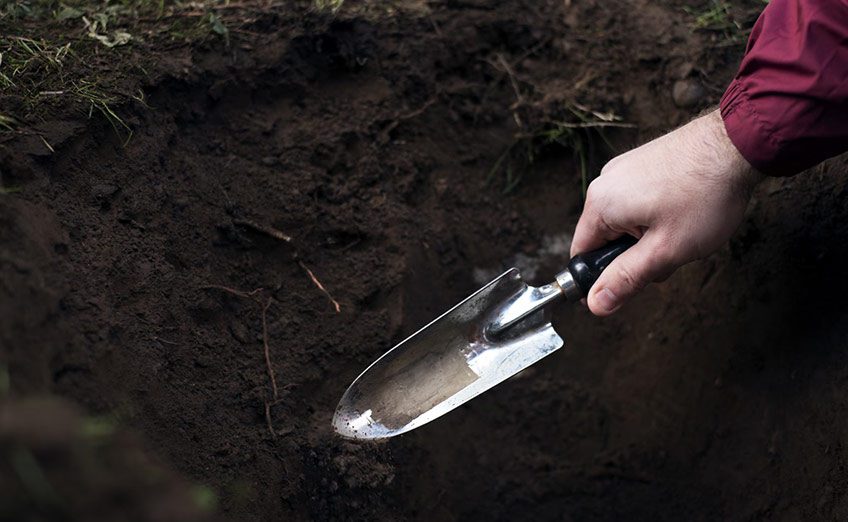 “When you’re teaching, your worldview comes out,” he says, “And it’s not a welcome thing to integrate faith and science; it’s not a popular position in academia. I wanted to do my work from my worldview. I also wanted to work someplace where teaching and mentoring were emphasized.”

So when Stuckey saw MU had an opening for an environmental science professor, he jumped at the opportunity. “There aren’t that many jobs like this in the US,” he observes. “I get to be myself. I get to be in a place where my worldview is not only accepted, but embraced. That’s rare in academia.” 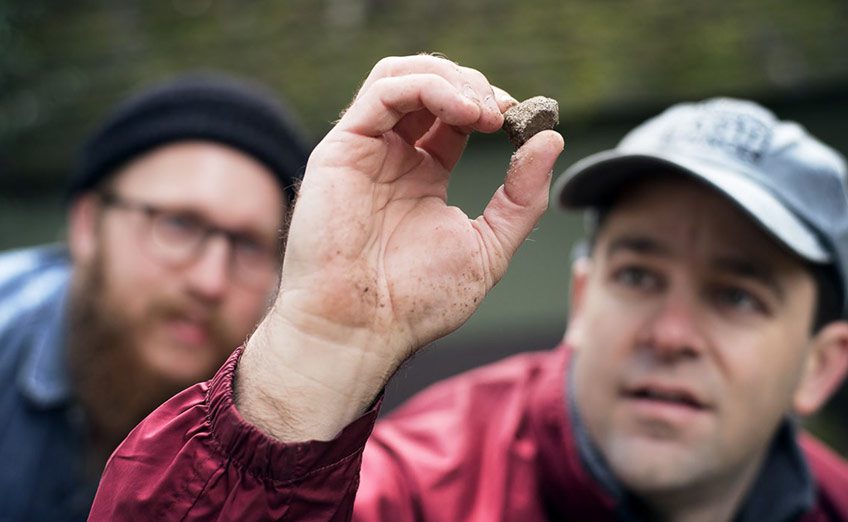 This fall Stuckey is teaching Intro to Environmental Science and General Chemistry, and come spring he’ll be leading a course on science and faith integration. “I’m excited to help mentor scientists who are Christian,” he says. “They have to be able to defend their worldview, and it’s essential that they engage with the dominant worldviews. I think Multnomah is a great place where that can happen.” 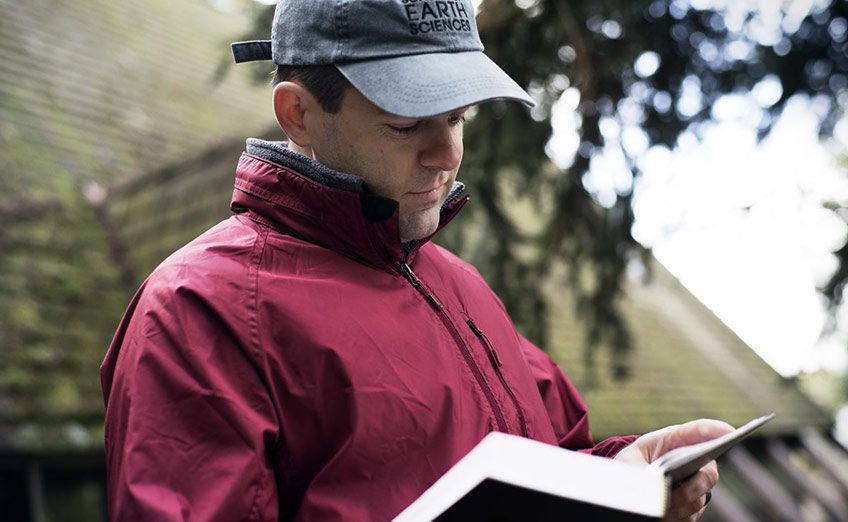 While many Christians shy away from exploring opposing outlooks, Stuckey welcomes the opportunity. “If you can’t discuss these things, and if you’re not engaging with other perspectives, then I don’t know how you can be a transforming force in the world,” he says.

Becoming such a force requires confidence, something Stuckey is keen to instill in his students. “It’s rewarding to see their enthusiasm, to see them get excited about things they haven’t thought of before,” he says. “But it’s also rewarding to see them struggle through things and realize that they’re surmountable.” 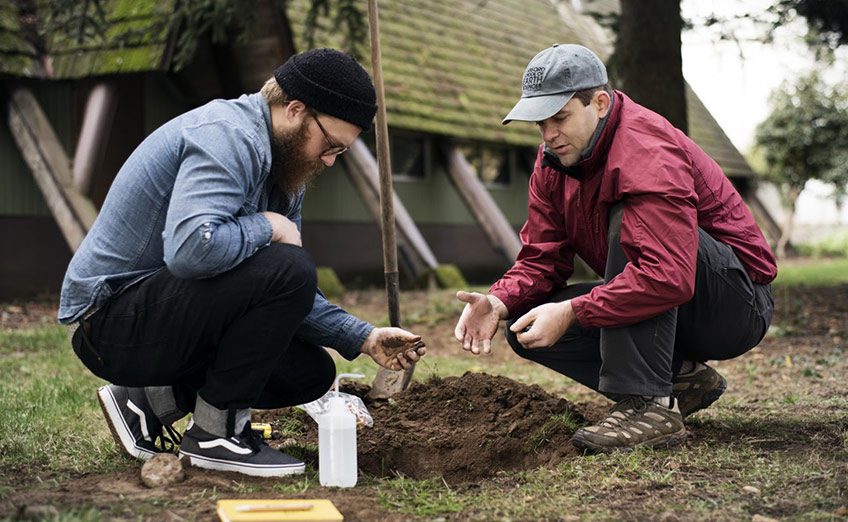 When Stuckey’s not in the classroom, he’s busy crafting environmental science courses for the years ahead. “Developing an applied science program in this kind of culture is great,” he says. “Multnomah is doctrinally sound, and there’s no capitulation or compromise of core Christian doctrine. But there’s room for diversity of faith and dialogue on peripheral issues. Not many other places are like this, I imagine.” 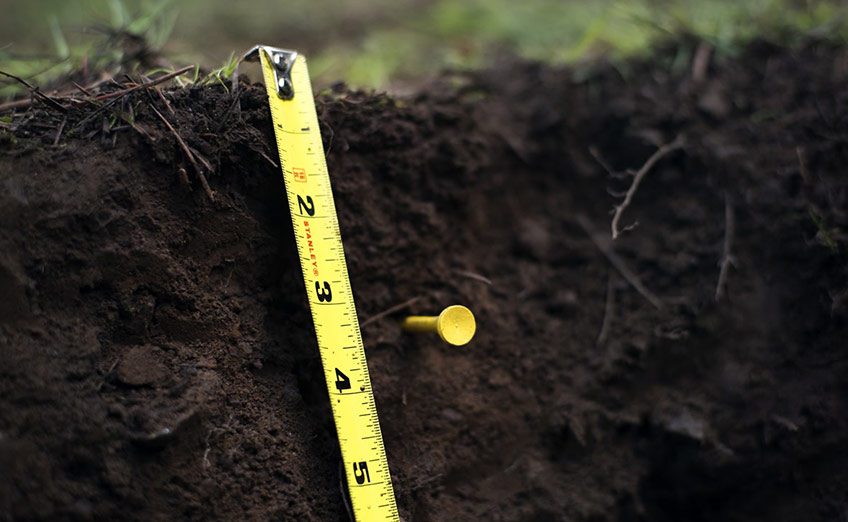 According to the Bureau of Labor Statistics, employment of environmental scientists and specialists is projected to grow 11 percent between 2014 and 2024, faster than the average for all occupations. Public interest in the hazards facing the environment has increased dramatically in recent years. This concern, combined with rapid population growth, is expected to incite a higher demand for environmental scientists in the years to come. 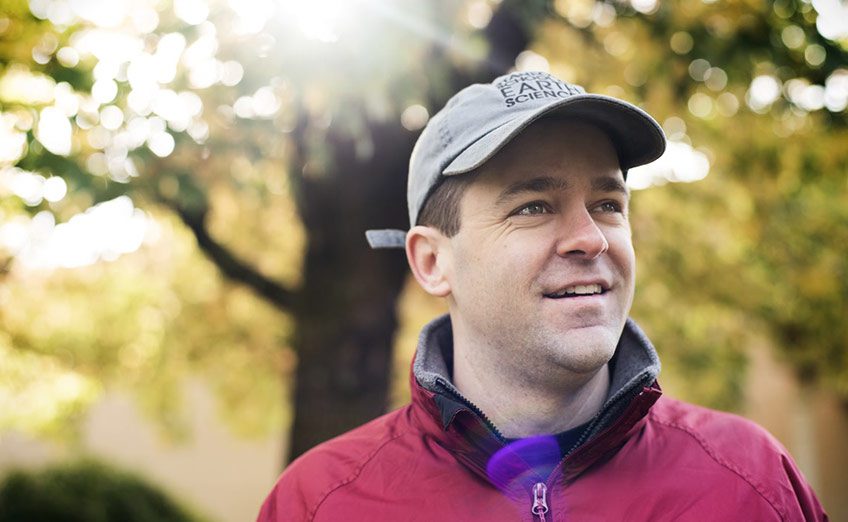