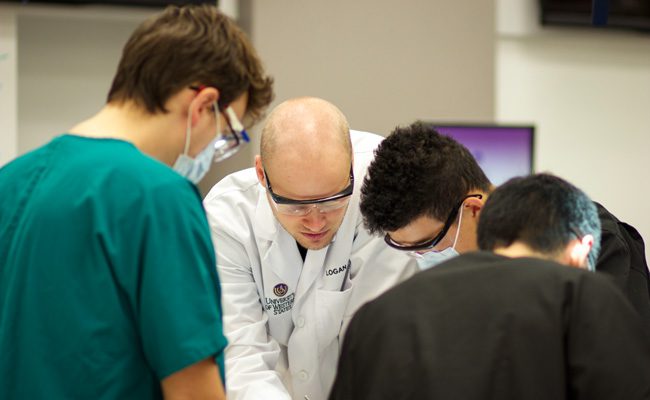 PORTLAND, Ore. – The path to a career in medicine just became a little less daunting for biology majors at Multnomah University.

MU is teaming up with University of Western States to offer an accelerated program that allows students to earn a Doctor of Chiropractic degree in six years. The program involves three years of biology at Multnomah and three years of study at UWS, saving students an entire year of academic work and tuition compared to the traditional DC route.

“This is a first for us – this is a new day,” said Dr. Daniel Scalberg, dean of the School of Arts and Sciences at Multnomah. “It means that we’re now in the same league as Portland State and Oregon State, who have the same agreement. For students who are motivated, they can be a fully certified DC six years from the time they arrive at MU.”

Under the agreement, MU students will be admitted to UWS when they complete the pre-chiropractic program with a minimum 3.25 GPA. They’ll finish their fourth year of undergraduate work at UWS to earn their biology degree, and then they’ll be poised to wrap up the DC program two years later.

Multnomah students will have access to state-of-the-art lab facilities and equipment at UWS, which offers numerous degree options for aspiring allied health professionals. Students also will have access to the admissions staff at UWS to ensure a smooth transition between schools.

“Our students will be able to call their Admissions office anytime, and their folks will be excited,” Scalberg said. “They will welcome our students as their own.”

For more information, visit the Doctor of Chiropractic page.

About University of Western States