The following post was written by Kari Johnson, a history major at Multnomah University. 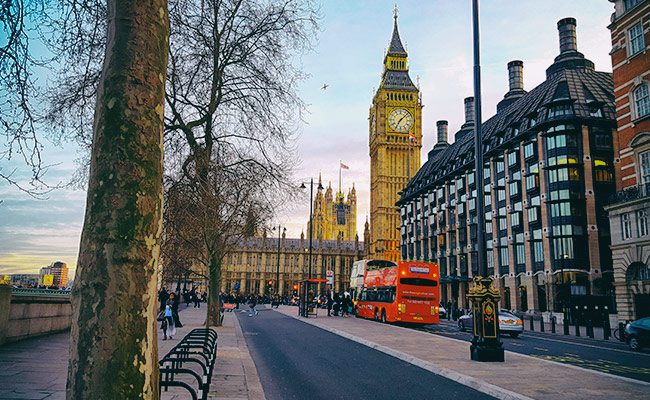 I recently returned from a short-term study abroad trip to London. I was in a class called Tudor-Stuart England, and we spent this semester studying about the Tudor and Stuart dynasties, which lasted from 1485-1714. We read a book about daily life in Tudor England, a biography of Queen Elizabeth I, and a history of the King James Bible. We studied maps, took tests, and listened to lectures. We watched a great documentary by Simon Schama about the Tudors and Stuarts. Then the day finally came when all that studying came alive for us. As a class, we traveled to England, where we got to actually see the places we had been learning about.  It was amazing!

I was very excited to visit England. I have read many books set in England and have been interested in going there for a long time. Then after studying so much about English historical sites, I knew that it would be awesome to see those places in person and experience that history. I also love traveling in general, so I was pretty thrilled to have the chance to go abroad for the first time. But I didn’t realize quite how amazing the trip would turn out to be.

While we were in England, we saw many cool places. My favorite sites were probably the palaces. At Hampton Court Palace, I, got to see Catherine’s “prayer closet,” which was very large and had a beautiful glass domed ceiling. I imagined what it would be like to have my devotions in such a special place, and I was inspired by the fact that Catherine made her walk with the Lord a priority even in a position of power where she was likely very busy with queenly duties. I also really liked the Great Hall, where Henry VIII held banquets. There were fabulous historic tapestries in the Great Hall depicting the Abraham story, and I was really intrigued by the fact that Henry VIII identified with Abraham since they both had a son late in life. The gardens at Hampton Court Palace were also beautiful and peaceful. It was amazing to get to walk where incredibly famous and powerful historic figures, like Henry VIII and Elizabeth I, had walked over four hundred years ago. I also appreciated Kensington Palace, where Prince Harry, Prince William and Princess Catherine live currently. We didn’t see their apartments, of course, but we did go into the historic part where William and Mary, and Queen Anne, lived in the seventeenth and eighteenth centuries. There was also a very interesting display of Princess Diana’s dresses, and I liked getting to know more about her life and her fashion sense. We also got to see Buckingham Palace from the outside, where Queen Elizabeth lives, which was very special. It’s very large and elaborate, and I really liked the statuary and flowers outside as well.

A few other sites also stood out to me. It was very enjoyable, on one of our free days, to visit the Jane Austen Centre in Bath. I liked learning more about her life and the Regency era in which she lived. I had tea and scones with jam and clotted cream in the Regency tea room, and I got a really cool book about Regency culture. In the Tower, we got to see the Crown Jewels, which were absolutely magnificent. We saw the robe and mantle which the monarch wears during the ceremony, multiple different crowns, the Sovereign’s Orb, ceremonial swords, and anointing supplies. And we saw a gigantic, elaborately carved golden punch bowl, about four feet across. Wow!

I really liked the English breakfast we had each morning at the hotel. The hotel staff came and waited on us like in a restaurant. I had hot chocolate, a sunny-side-up egg, white toast, bacon, and beans every day. Their bacon is kind of different; it’s more like Canadian bacon and very good. The best part was the beans, and I wish we had beans for breakfast here. The hotel staff talked to us every day about what we had been up to, and they were very friendly and funny. Our hotel was great; I highly recommend the Luna Simone hotel.

It was also awesome experiencing a different culture. Of course, I heard a lot of cool British accents. But there were also many other languages spoken in London, like French, Spanish, Italian, and Japanese. London is a very diverse city. Another thing that is a very important part of their culture is the public transportation system. It’s highly developed and efficient, and almost everyone uses it. I never saw a gas station (or petrol, as they would say) the whole trip, and cars were pretty rare. We learned how to get around on the underground (subway), buses, and trains, and by the end of the trip we felt pretty confident on public transportation (for the most part, anyway). Also, England doesn’t have separation of church and state, but it does have freedom of religion for dissenters (non-Anglicans). So most churches are Anglican, and the Queen and Prime Minister share religious messages with the public. It’s a very different climate from America in that way. The food is somewhat different. Besides the English breakfast, we also had Cornish pasties, which are like meat pies, and pretty good. And in England they eat corn on sandwiches and pizza, which was definitely different but also pretty good. It’s also cool how people dress; most men we saw wore suits, and most women wore classy trench coats and dresses.

I really enjoyed the opportunity to experience the lives of historical figures by touring their castles. Their homes, and the stories I heard about them, helped people like Henry VIII, Queen Anne, William and Mary, Elizabeth I, and Mary I come alive to me. Seeing their homes, their portraits and their tombs helped me think about these monarchs more deeply, empathize with them, and imagine what it would be like to live during their times.

Another thing I learned was about the character of God. I feel that when we as Americans think about God being our King, we tend to think about that in terms of His mighty power and our allegiance to Him as citizens of His Kingdom. These aspects are definitely true, for sure. But I think we can miss another aspect of His Kingship, and that is His majesty, splendor, glory and riches. This part of God’s character was really brought home to me as I learned about the glorious traditions of Great Britain’s monarchy and visited historic churches and palaces. The Crown Jewels and all the ornate architectural beauty of cathedrals and palaces helped me see that God is not only powerful, but also splendid, glorious, and awe-inspiring.

I am very grateful to have had the opportunity for such a special trip. I really enjoyed all the places I visited, and I’m glad we had studied so thoroughly beforehand so that we could appreciate what we were seeing. It was fun to go with a group of fellow students and Dr. Scalberg and his wife, and I feel like we were all able to get to know one another better and enjoy spending time together on this trip. I really appreciate how relational Multnomah is and the strong friendships I have been able to build here, including on this trip. And Multnomah does a great job in emphasizing international travel and short-and long-term study abroad trips; there are lots of trips offered, to all kinds of places around the world, and more affordably than many students would expect. I love Multnomah and am so happy to study here. Multnomah has been an important part of my spiritual walk and my academic journey, and this study abroad to London has been a big part of that.